Home » God Saw That It Was Good: A Safari Through Salvation History 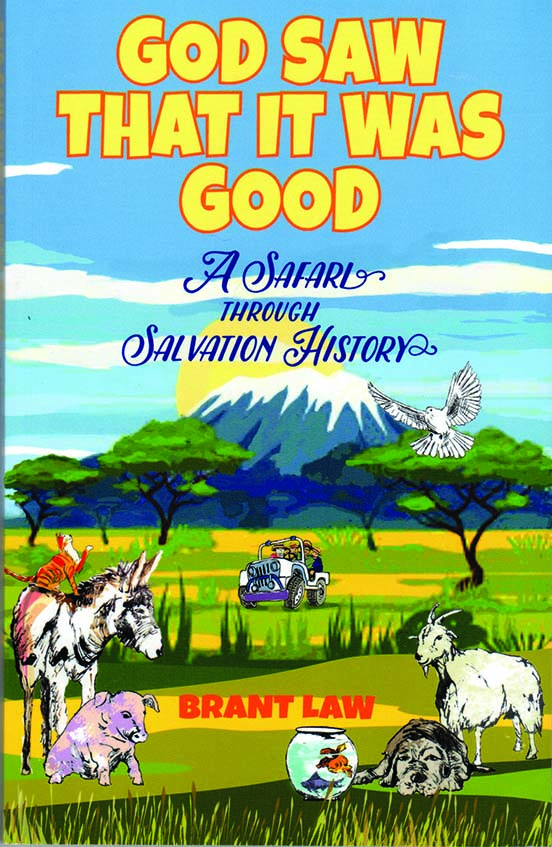 God Saw That It Was Good: A Safari Through Salvation History

Brant Law, author of God Saw That It Was Good: A Safari Through Salvation History, dreamed of being a veterinarian growing up. He became a high school math teacher instead, but his love of animals remained, leading to this delightful to read (and thoroughly researched) collection of stories about God’s creatures great and small mentioned in the Bible, saints linked to them and his own personal critter anecdotes.

Brant’s “safari” begins with the noble donkey, a familiar figure in Christ’s life from the Nativity to Palm Sunday. A donkey belonging to St. Francis of Assisi is said to have wept at the saint’s death and a mule, “half-brother to a donkey,” featured significantly in St. Anthony of Padua’s preaching.

Though pigs’ meat was biblically listed as “unclean” to eat and they memorably served as recipients of evil spirits driven out of the possessed, a porcine participant figured prominently in the miracle performed by St. Blaise which led to the rite of blessing throats, and the wild boar in St. Brigid of Kildare’s story came to a happy end.

Mice are in the Bible too, though it takes a little digging to ferret them out. Did you know the Philistines returned the seized Ark of the Covenant accompanied by five golden mice in reparation? Mice destroying a farmer’s field dropped dead at the Sign of the Cross by St. Gerard Majella, but St. Martin de Porres, who cared for mistreated animals, invited one to dinner.

Fish, Law points out, are well-represented in Scripture, multiplying to feed a multitude, restoring sight to the blind and feeding the resurrected Savior. They are also symbols of biblical figures, such as Jonah of whale fame, and of Jesus and his ministry.

There are mythical animals in the Bible too, and Law fills us in on the basilisk, Behemoth and Leviathan, wrapping things up with stories of the saints featuring the Loch Ness Monster (St. Columba) and a dragon (St. George).

The author rode around on a beloved pet cow as a toddler and cheerfully elucidates on bovine virtues, noting that in Sacred Scripture they represent patience, strength, sacrifice and fortitude. Delved into are Pharaoh’s dream of fat and skinny cows, the wandering Israelites’ golden calf, the prodigal son’s fatted calf and more. In later times, St. Brigid of Kildare worked a miracle with a cow.

Lambs, sheep and rams biblically abound, from Abraham’s sacrifice to John the Baptist proclaiming Jesus the “Lamb of God” and Christ calling himself the “Good Shepherd.” Sheep-related saints include shepherdess St. Germaine Cousin and St. Clement of Rome.

A confirmed cat-person (as was St. Pope John Paull II), Law regretfully notes that while no house cats are found in Sacred Scripture, their larger relatives, the lions, are there as symbols of strength, power, courage, dignity and ferocity. Samson is touted for killing a lion barehanded and Daniel survives the lions’ den, but their smaller counterparts are in stories of St. Gertrude of Nivelles (patron saint of cats) and Blessed Maria Bagnesi.

The not-so-popular snake slithers into the pages of Genesis in the Garden of Eden, with a brood of his kin later attacking the Israelites who railed against God. In Revelation, Satan is a snake and St. Patrick is famous for driving the snakes out of Ireland, but fleeing snakes in fear can sometimes lead us closer to God, Law notes.

In the Bible, the horse is mentioned in relation to war and usually symbolizes strength, as in descriptions of the horses of Solomon and Egypt’s Pharaoh. They are also in the Apocalypse, with Christ on a white horse symbolizing the ultimate source of strength. Horse-related saints include St. Eligius of Noyon (patron saint of horses) and St. Martin of Tours.

“In the animal kingdom, I firmly believe that dogs sit at our right hand,” writes Law. They do not have much of a presence in the Bible, however, primarily mentioned in passing, as in Gideon picking 300 men who “drank like dogs” to defeat the Midianite army and dogs licking Lazarus’ sores. Saints-wise, however, dogs come into their own with St. Bernard of Montjoux in the Swiss Alps, St. Roch (patron saint of dogs) and St. John Bosco and his faithful dog, Grigio. Their wolf kin can be good or evil.

God speaks to us through his creation, including birds, with the dove on Noah’s ark offering hope and uses the imagery of eagles’ wings when describing freeing his chosen people, while Jesus conveys his love by likening us to sparrows. St. Brendan the Navigator tells of birds guiding his group of Irish monks, while St. Francis of Assisi preached to birds who listened intently.

Insects are not left out, being among the plagues of Egypt, but fare better with the saints, though it is to teach them to draw closer to God through suffering. Bees are the good guys in tales of St. Ambrose, St. Augustine of Hippo and St. Rita of Cascia.

Law concludes with the hope his book will draw us closer to God and his creations. “It is my aim,” he says, that some of these quirky stories and thoughts will bring a smile to your face and help to reopen the eyes of faith in your heart.”

About the Author: Brant Lawhas a bachelor’s degree in Theology from Saint Gregory’s University in Shawnee, Okla. He lives in Alma, Ark., with wife Christy and three cats and works as a high school math teacher. Follow him on Twitter @Mr_Blaw or on Facebook at Brant Law @lawesomebooks. Learn more about his book at paracletepress.com.