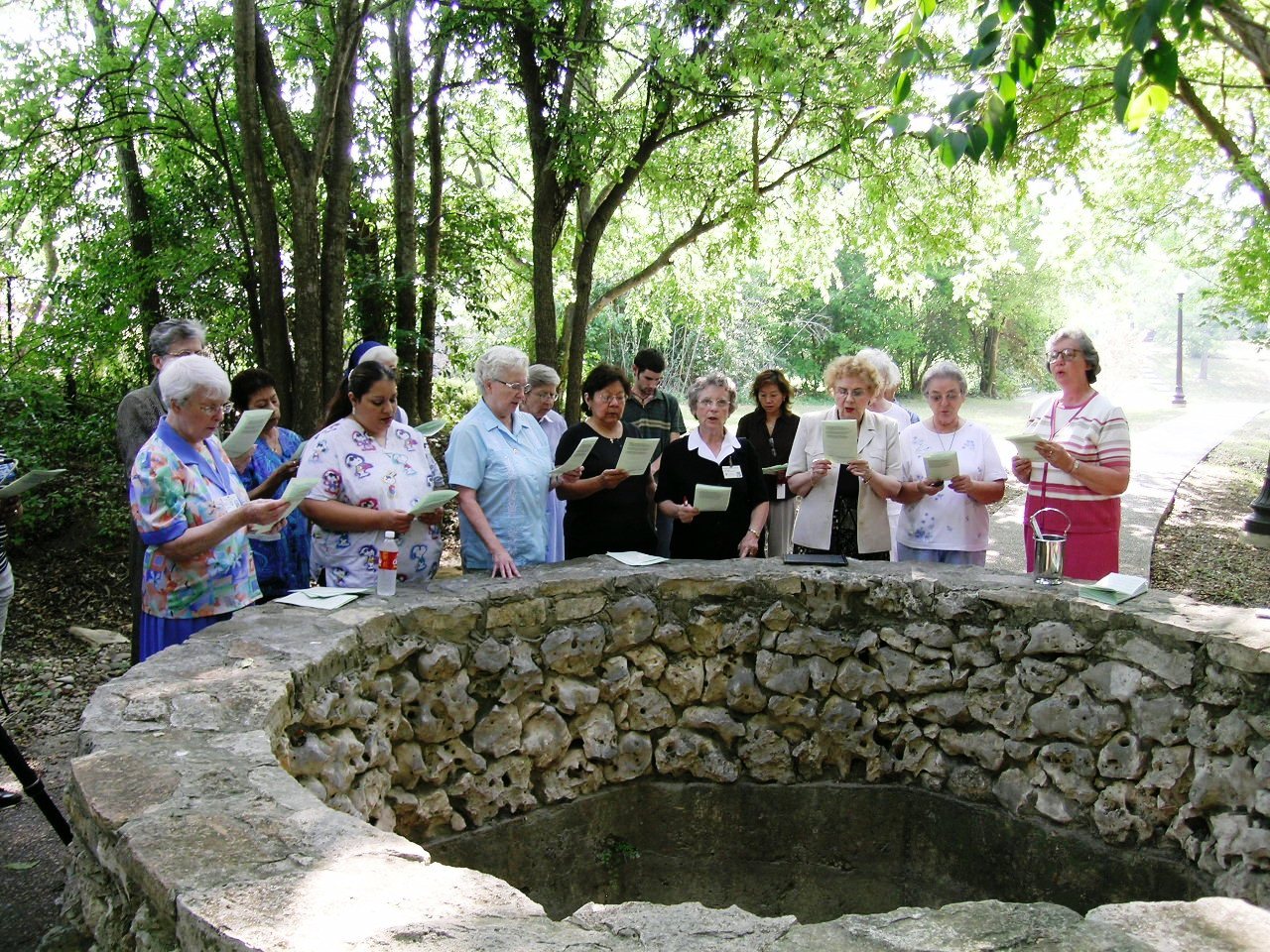 Bridget McDermott Flood, author of Blue Hole Wisdom: My Journey with the Sisters, has written a spiritual memoir of the Sisters of Charity of the Incarnate Word that flows as easily and true as the pristine waters of the Blue Hole, an ancient spring that, in a good year, visibly feeds the San Antonio River. No longer the 19th century geyser that grandly shot 20-feet high on Mother House land, even in years of Texas drought it continues in a subterranean cavern. The sisters’ work likewise perseveres.

“For more than 150 years,” Flood writes, “the Sisters have worked, walked, and prayed here. Like the waters of the Blue Hole, their wisdom runs deep, clear, and pure.” It is a wisdom, she adds, derived from their “Incarnational Spirituality,” their belief in God’s presence in all things and especially in relationships. Executive director of the Incarnate Word Foundation in St. Louis for 23 years, Flood is wonderfully qualified to tell significant narratives shared by the sisters she has come to know over the years, insights that can be touchstones for our own spiritual journeys.

She first touches on the foundresses, three young sisters (Sister Madeleine Chollet, CCVI, Sister M. Agnes Buisson, CCVI, and Sister St. Pierre Cinquin, CCVI) sent from the monastery of the Incarnate Word and Blessed Sacrament in France at the request of Bishop Claude Dubuis of Galveston to care for the sick in Texas: “Our Lord Jesus Christ, suffering in the persons of a multitude of the sick and infirm of every kind, seeks relief at your hands.”

Specifically recruited from the village of Lyon for a crash course in nursing, they would eventually found hospitals, orphanages, schools, a university and other ministries for the suffering and underserved in San Antonio and elsewhere.

The modern-day CCVI sisters interviewed by Flood over the past decade gave various reasons for their choice of religious life, she notes, but all spoke of it as a call. Sister Teresa McGrath, CCVI, who arrived from Ireland in earlier years, was ready to be placed wherever she was needed and was assigned to teach. Sister Kathleen Coughlin, CCVI, who’d hoped to be a teacher was told she would become a nurse and found that “let go and let God” was the answer. “I have done that,” she relates, “and I have been nothing but blessed and enriched.” She later became CEO of one of the sisters’ largest hospitals.

Defining moments for Sister Teresa Maya, CCVI, present congregational leader, were those when she was asked to do something she had never imagined doing. “They have allowed me to understand that it is not about what you do, or where you are doing it, or the job description you have,” she says. “It is simply about being part of this bigger thing.”

Sister Maria Luisa Vélez Garcia, CCVI, from Mexico, who studied liberation theology, found herself struggling with English and acceptance after election to the General Council. “The first year was hard,” she relates. “The second was better and then by the third year I was happy.” She went on to serve in many South American countries as part of Pastoral Popular, working with the poor.

Sister Alice Holden, CCVI, was leading Re-Barn, a vibrant spirituality and arts center in the congregation’s old dairy barn, when Flood met her. When it became necessary to raze the barn to expand the sisters’ retirement complex, Flood expected Sister Alice to be devastated. Instead, she was excited about her new ministry, Chispas or Sparks. The barn had been “a beautiful gift,” she said, but “the mission is always within me.”

Flood traveled with Sister Dorothy “Dot” Ettling, CCVI, as part of Women’s Global Connection to visit and briefly work with the sisters’ ministry in Zambia. She also visited them in Peru, where Sister Rosa Margarita Valdés Tamez, CCVI, had served during the terrorism of Sendero Luminoso (Shining Path) in the ’90s. The only way to change things, she told Flood, was to enter into the reality of the people there and make known the Incarnate Word. Flood visited the sisters in Mexico as well.

Accompanying them during the Vatican Visitation was another memorable experience. Though a difficult time, Sister Yolanda Tarango, CCVI, then congregational leader, saw the process as bringing their sisters from all countries together and opening the eyes of laity to the sisters’ good works and springing to their defense as a result. Sister Helena Monahan, CCVI, in congregational leadership, noted answering the Visitation’s questions “fostered true collaboration” among the sisters.

While some congregations are going out of existence, the Sisters of Charity of the Incarnate Word are not in that category. “They are amazing women,” Flood states emphatically, “and they continue to be.”“Blue Hole Wisdom: My Journey with the Sisters,” by Bridget McDermott Flood; Incarnate Word Foundation Press; 2020; soft cover; 232 pp.; $14.95. Itcan be purchased at the congregation’s Heritage Center, the University of the Incarnate Word book store or through www.blueholewisdom.com or Amazon.com. All proceeds support the sisters’ charitable works