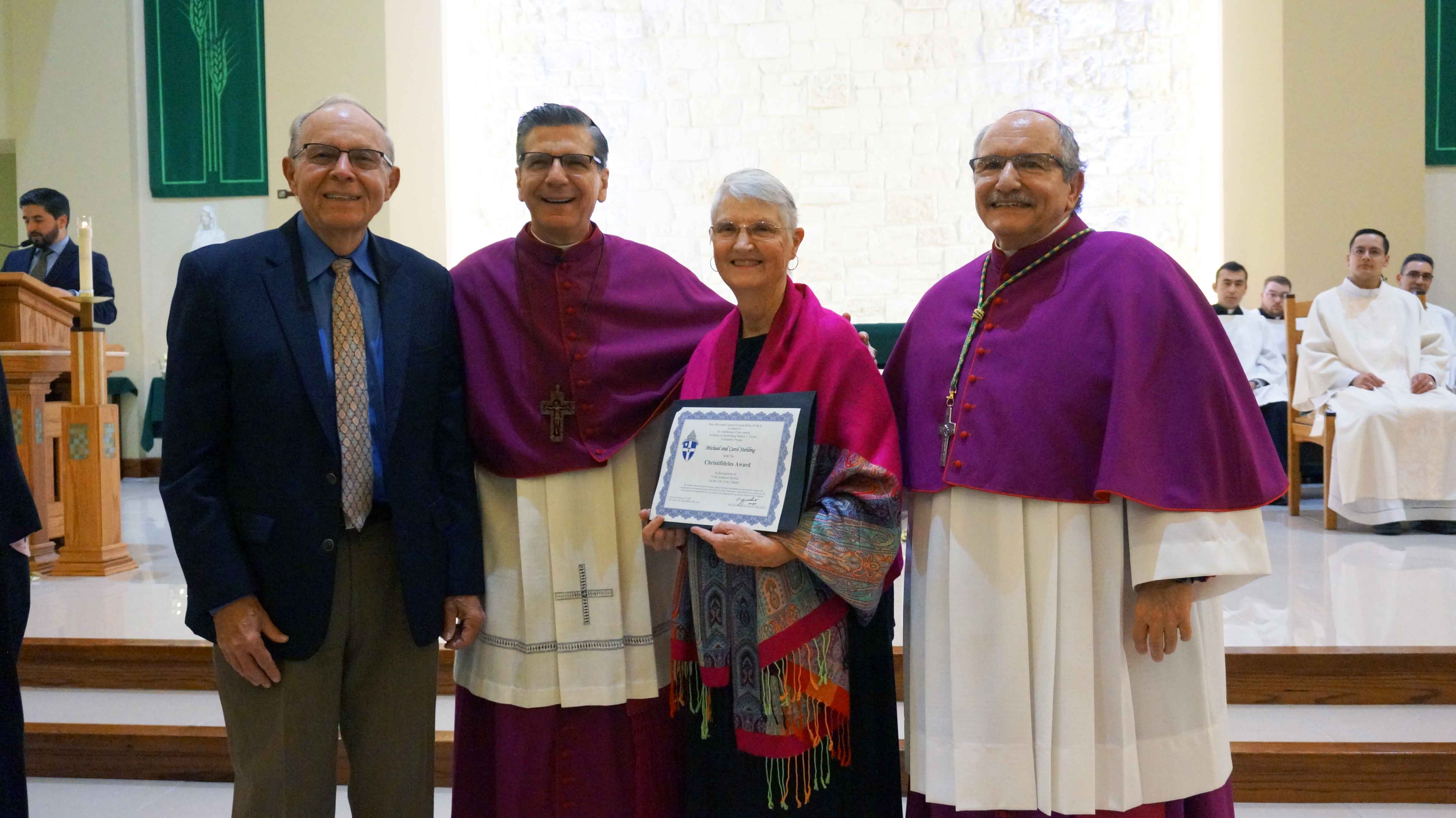 The Christifideles Laici Award, presented in honor of Patrick F. Flores, is bestowed upon a Catholic couple who have demonstrated by participation in parish life, the personal and ministerial renewal called for by the papal exhortation, Christifideles Laici, calling the laity to the vocation of responsibility for the Church’s life springing from the gift and mission of their baptism. Archbishop Gustavo García-Siller, MSpS, himself chooses the recipient of the Christifideles Award.

The 2020 recipients are Mike and Carol Stehling.

Mike and Carol Stehling are missionary disciplines, and have been very generous with their time, talent, and treasure to numerous Catholic ministries for decades through their spirituality, commitment, and financial support. Particularly over the past 20 years, their grass-roots activity has touched many people’s lives in one-on-one ways, making a tremendous difference for the Church.

Longtime parishioners of St. Matthew’s Church in San Antonio, the couple for many years have been members of the “saintly sixers,” faithful who attend the 6 a.m. Mass. The Stehlings were very active with ACTS retreats at the parish, and Mike has been involved with different Bible studies there, helping and enriching all what attend.

He has also been a strong pillar of evangelization at ACTS Missions, having attending or served on team or in leadership at countless ACTS retreats. Mike has also been co-chair or chairman of several ACTS fundraising galas. There is nothing he will do for ACTS in order to bring just one person to Christ. He has a passion for the Gospel and making Christ known, and a generous heart to be of help to anyone.

Mike has also served on the ACTS Board for many years as ACTS has changed and developed over time.

The Stehlings were also instrumental in the early years of the development of Guadalupe Home. Now a ministry of Catholic Charities of the archdiocese, Guadalupe Home is a transitional shelter for pregnant and parenting mothers and their babies who find themselves homeless. Rather than provide emergency shelter for a night or two, it offers a safe, long-term, no-cost home for pregnant and parenting mothers of children age three and below who are interested in making a change for a hopeful future.

Carol was active with prison retreats for years, and in ACTS retreats as well. She also worked with Auxiliary Bishop Michael Boulette for several years prior in setting the foundation prior to the establishment of St. Peter Upon the Water, A Center for Spiritual Direction and Formation in Ingram. The Center is open to all persons seeking spiritual direction, and offers a three-year formation program for spiritual directors, as well as ongoing formation for formed spiritual directors, and retreats for men and women.

She has been a member of the Board since its creation. Carol was assisting at the Center with Cycle 1 and Cycle 2, and retired prior to Cycle 3, however, she returned to assist with Cycle 4 before entering retirement again.

The Stehlings have funded several scholarships for participants in the program from inner-city parishes.

For a half decade to seven years Carol was also heavily involved with silent retreats held at the Oblate Renewal Center. She also served as a member of the Board of Trustees at Oblate School of Theology as well. She has devoted much of her life to service of the Church.