Home » Let us care for Mother Earth, challenges archbishop at Caring for Creation Mass at missions 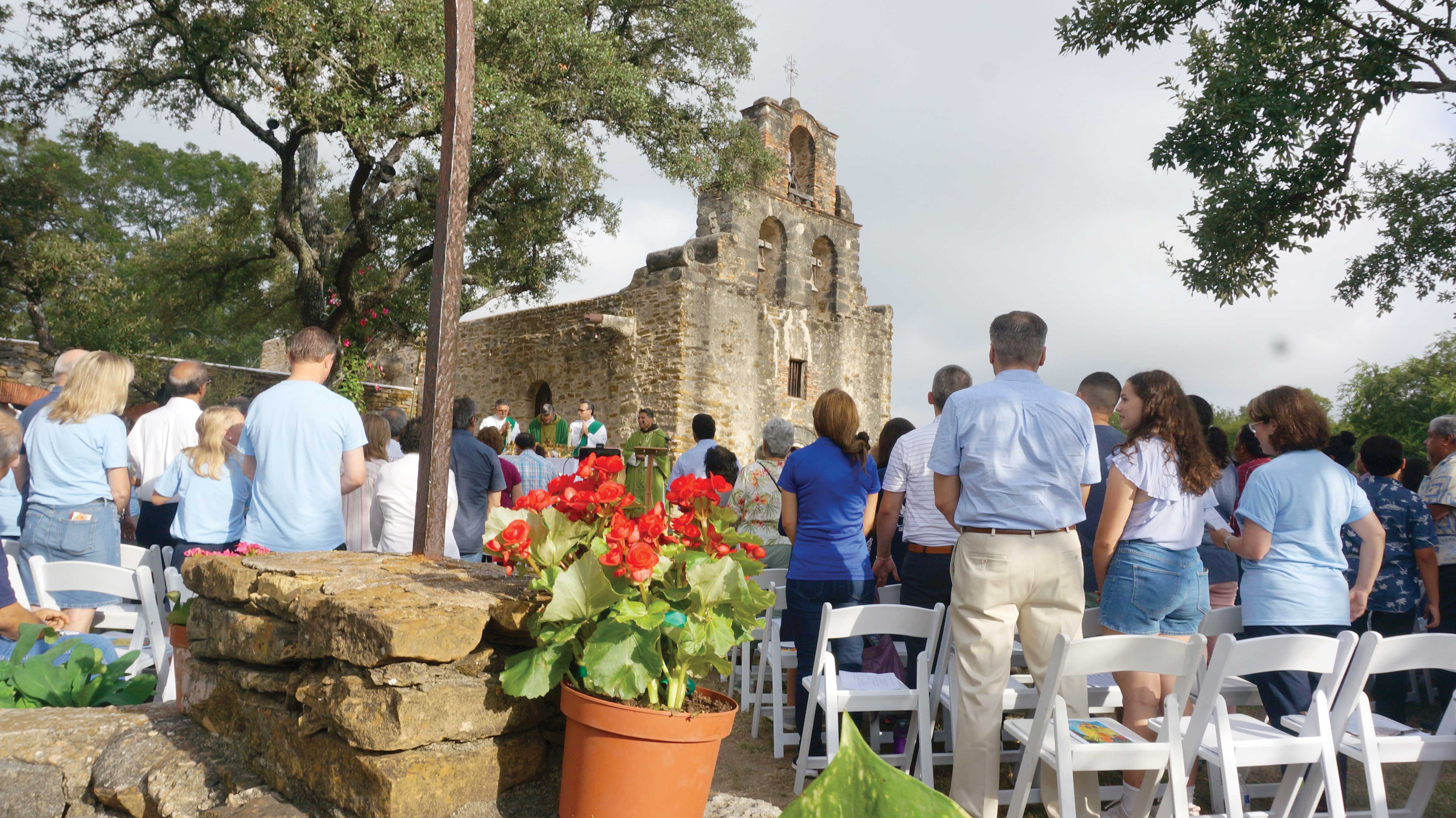 Let us care for Mother Earth, challenges archbishop at Caring for Creation Mass at missions

Under an early Sunday morning overcast sky that eventually turned into spectacular sunshine, the El Camino de San Antonio Caring for Creation Mass took place under the trees just beyond the front entrance of Mission Espada Sept. 8, with more than 500 people gathering for a liturgy in which Archbishop Gustavo Garcia-Siller, MSpS, told attendees that they could feature nature — the heat and wind — on their face in a setting different from their regular parish services.

The Season of Creation, from Sept. 1 to Oct. 4, encouraged all to celebrate the gift of creation and work together for our common home. The archdiocese celebrated the fourth anniversary of the papal encyclical, “Laudato Si,” with the festive Mariachi Mass, funded by the Archbishop’s Appeal, to pray that God may help us respect the earth and trust the goodness of creation.

“When God created the heavens and the earth, he saw that it is very good! God put women and men on the earth as stewards of its riches and resources,” the archbishop began his homily, then lamented, “But we have not been good or wise stewards. There is growing and very serious concern about the deterioration of the environment that impacts every human life.”

Pope Francis has asked, who is the poorest, poorest, mother in the world? His answer is Mother Earth!

“We must begin again to care for the earth, to treat it wisely, not greedily,” the archbishop urged. He quoted an ancient African proverb which says: “You do not own the land.  Your grandchildren gave it to you as a gift!”

Archbishop Gustavo acknowledged how the enthusiasm of a new beginning frequently erodes when we learn the true costs and risks of the promises we have made. “Initial commitments are easy,” he said. “Perseverance is hard.”

In the Gospel reading from Luke, large crowds gather around Jesus. They are enthusiastic. They are not aware that he is on his way to Jerusalem or what will happen to him there. Jesus knows what awaits him in Jerusalem.

“He does not want to scare us away or frighten us,” the San Antonio prelate emphasized. “But he clearly tells us that, if we wish to be his disciples, we must be willing to pay the costs and take the risks involved.”

Following Jesus, he explained, being missionary disciples, means listening attentively to the living Word of God, allowing it to take deep root in our lives and bearing fruit. “We must act on the gospel, not merely think or meditate on it!” he continued. “The kingdom of God is a place of justice and peace, unity and harmony, wise stewardship of the earth’s resources.”

The archbishop said he recognizes that we live in very difficult times. “There is so much division and polarization, so much anger and hatred, so much enclosing ourselves behind walls with people who think exactly the way we do. It is hard to build up the kingdom today,” he said sadly.

But Pope Francis gives us the antidote to all of this poison: true encounter with others; authentic mutual respect and dialogue; recovering respect for Mother Earth, the environment.

The Holy Father reminds us that “the Eucharist is a source of light and motivation for our concerns for the environment, directing us to be stewards of all creation.”

The Missionary of the Holy Spirit concluded by saying, “We are nourished by the Word of God and by Christ’s Body and Blood and led by the Holy Spirit. Let us walk courageously in faith, love, and hope.”

At the conclusion of the liturgy, Rebecca Simmons, executive director of the El Camino de San Antonio Missions, gave instructions for the one-and-a-half mile pilgrimage from Espada to Mission San Juan Capistrano.

Led by Archbishop Gustavo, pilgrims walked, reflected, and enjoyed God’s creation along the San Antonio River on the Mission Reach trail, with several stops along the way to hear excerpts recited from “Laudato Si.” Upon reaching San Juan Capistrano, the archbishop provided a special blessing, and pilgrims each shared a step they would take to protect the environment by writing their particular action on a recyclable note and attaching it to artwork depicting a large tree. Attendees were also given packets of seeds as a remembrance of the event.

View the Mass in its entirety here:

Published in Caring for Creation, Laudato Si and Mission Espada