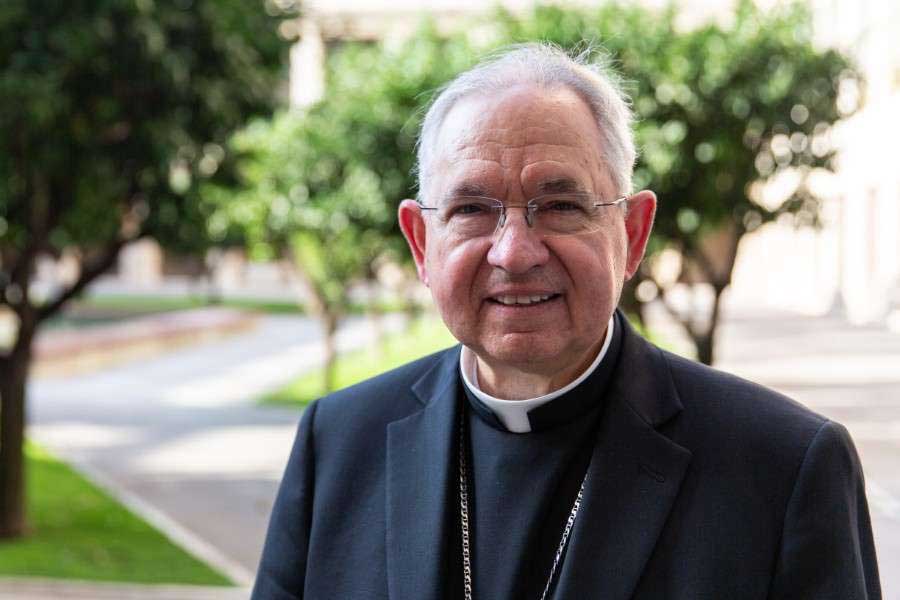 ‘I just wanted to be a priest’: Archbishop Gomez elected president of USCCB

WASHINGTON (CNA) — When he became a priest four decades ago, Archbishop Jose Gomez did not expect that he would one day lead the largest archdiocese in the U.S., or the country’s bishops’ conference.

“I just wanted to be a priest,” Gomez told CNA with a laugh, speaking about his election.

“Somehow God wanted me to do what I am doing, and I’m just counting on the grace of God to be able to be faithful to what God is asking me to do.”

“And also on intercession of Our Lady of Guadalupe,” he added, explaining that he has entrusted all of his ministry as a bishop to the prayers of the Blessed Virgin Mary.

Gomez, 67, was elected Nov. 12 as president of the United States Conference of Catholic Bishops. The archbishop, born in Monterrey, Mexico, and ordained a priest in Spain, is the first Latino to lead the bishops’ conference. He is also the first immigrant to head the conference.

His election is historic, but it was no surprise. Gomez became vice president of the conference, a central organizing body of almost 200 Catholic bishops with more than 300 employees, in 2016. The vice president is traditionally elected to the top job, so Gomez knew his election was likely.

But, he told CNA, the real surprise was becoming vice president three years ago.

“I was not expecting to be the president. Some people put my name forward for election as vice president [in 2016].”

“To my surprise I was elected vice president, then once you are the vice president, it is more likely that they elect you president. The whole process was a surprise to me, but I see that God is asking me to do it, and I just pray that with the grace of God I can do a good job.”

Gomez laughed, noting that he had never expected to become a Denver auxiliary bishop in in 2001, the archbishop of San Antonio in 2004, or in 2010 head of the Los Angeles archdiocese, the largest local Church in the country.

The archbishop told CNA that his goal is to “try to live what I preach, and then, also, my ministry to the people — that’s the most important thing.”

His ministry, he said, includes serving “my brother bishops, priests, deacons, and also the lay faithful. Because really my vocation started with ministry to lay faithful.”

“The fact that I am the archbishop of Los Angeles gives me a beautiful opportunity to be with the people, because there are so many people active in the Church in Los Angeles. And also in the conference of bishops, really what’s its all about it serving the people, so I hope that I can have the opportunity to be with people, in events where people are, and that I can continue to be a pastor which is, I believe, my vocation.”

Gomez is the first bishop elected to lead the conference to be associated with Opus Dei, a Church group, founded in Spain and supported by Pope St. John Paul, that focuses on finding holiness in everyday life, and on the call to holiness of lay Catholics. The archbishop became affiliated with Opus Dei as a college student, and was a priest in the organization, formally called a personal prelature.

The archbishop’s vision of the Church, focused on collaboration and friendship between laity and clerics, and on the idea that everyone should be a saint, is informed by his experience in Opus Dei.

“The spirituality of Opus Dei,” he told CNA, “basically is to strive for holiness — personal sanctification — and ministry. Sharing our faith with everybody else.”

“Most of the members of Opus Dei are lay faithful living their lives and working and trying to share the faith and to be holy.”

“Everybody, starting with the pope and going through every single bishop, and priest, and deacon, we all are called to strive for holiness, with the universal call to holiness, provided to us by the Second Vatican Council, and also, as Pope Francis is insisting that we should be missionary disciples, so that means sharing our faith with everybody else,” he added.

Gomez told CNA that groups like Opus Dei, along with other Church movements like the NeoCatechumenal Way and Communion and Liberation that have gained popularity in recent decades, emphasize “the universal call to holiness making a reality in the life of the Church.”

“All of those different institutions that are promoting the vocation of the lay faithful are a blessing for the Church.”

“By the work of the Holy Spirit there have been in the universal Church many groups of people working as a movement just to bring the beauty of the Chirstian life to the presence of the lay faithful all over the world,” Gomez added, comparing Church movements to the diversity of ministries and apostolates in parishes, which he called “the center of Christian life in the United States.”

The archbishop said that in his own ministry as a bishop, he looks to the example of Pope St. John Paul II, and, that among American bishops, he has been influenced and inspired by a number of bishops.

“Obviously in the United States I had the blessing of working together with Archbishop Chaput because I was his auxiliary bishop, so he has been a wonderful example to me. But I have been influenced by many other bishops: Archbishop Joseph Fiorenza, Archbishop Patrick Flores, and then Cardinal William Levada, who just passed away, he was a good friend.”

Levada, Gomez told CNA, “asked me, when I was a young auxiliary bishop, to be a member of the doctrine committee of the USCCB. So that helped me to get to know the workings of the USCCB.”

Gomez takes the helm of the bishops’ conference in a difficult time.

The sexual scandals that emerged in June 2018, with revelations of abuse on the part of former cardinal Theodore McCarrick, have preoccupied bishops and lay Catholics.

The ecclesiastical landscape has shifted too; the pontificate of Pope Francis is different in emphasis, tone, and style from those of his predecessors. Some U.S. bishops have been accused of resistance to Francis, and bishops have responded to his leadership in different ways.

“The reality of the bishops in the United States is that we all are faithful to Pope Francis,” Gomez told CNA.

“I think we all are united. There is some perception that we are not. But the reality — what I see — is that we are united in our ministry and in our Church.”

“Every pope brings some different aspects in the life of the Church that he, by the grace of God, believes are important. And we, the bishops of the United States, are trying to be more aware of what those things are, and try to make it happen in our ministry.”

Gomez acknowledged that Pope Francis’ leadership is not similar to that of his predecessors.

“I think it takes time for people to really understand the spirituality of Pope Francis.”

“I think there are many, many aspects that are different. They are cultural and spiritual; it’s the first time in the history of the Church that there is a pope from Latin America. And some of us, who have that experience, know that it is different from the culture in Europe, or in the United States, or in Asia,” Gomez said.

“It’s also the first time there is a Jesuit who is the pope. So every religious community, and the diocesan priesthood, have different spiritualities.”

“So I think we the bishops of the United States, and I personally, are learning how to appreciate the different aspects of the spirituality and the culture of Pope Francis.”

Gomez added that “every bishop has his own spirituality, and his own ministry in the diocese, according to the needs of the people in the diocese,” he said, noting the difference in his experiences while serving in Denver, San Antonio, and Los Angeles.

“San Antonio was basically a community of two cultures: Hispanic culture and the Anglo-Saxon culture. Now in Los Angeles we have people from all over the world. So my ministry is different.”

As he begins his term as president, Gomez told CNA he hopes to help the Church “to really understand the cultural realities of the people in the United States. I think it’s important for all of us to be more open to that.”

As Gomez discussed the importance of understanding the diversity of cultures in the Church, he also emphasized the source of the Church’s unity.

“Obviously I have the same truths as we all have, the teachings of Jesus Christ, in the Catholic Church.”