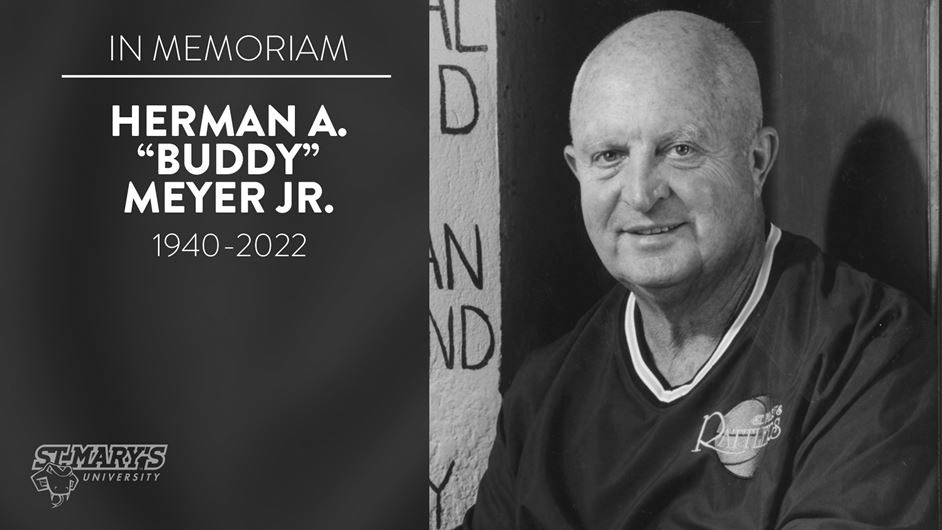 Meyer, a name long synonymous with the university for his renowned commitment to student-athlete excellence, died February 4 at the age of 82 after complications from emergency surgery, the family said.

“I feel privileged to have known Buddy Meyer, a major figure in the history of St. Mary’s University,” said St. Mary’s University President Thomas M. Mengler, J.D. “Not simply a highly successful coach, Buddy raised the profile of athletics at St. Mary’s and fostered the growth of countless student-athletes into future leaders in their communities.”

Meyer, who retired from coaching men’s basketball in 2005, impacted the lives of multiple generations of Rattlers through his 41 years at the university as student-athlete, coach and athletics director.

Meyer began his nearly lifelong career at the university by studying Physical Education and joining the men’s basketball team in 1961. He later became the first St. Mary’s student-athlete named all-conference all four years.

He went on to lead the St. Mary’s men’s basketball team for 27 seasons, serving as the athletics director at the school for 21 of those years from 1980-2001. Meyer notably led the Rattlers to the National Association of Intercollegiate Athletics national championship in 1989 — one of more than 500 victories he earned during his time as head coach at St. Mary’s. His teams won 17 conference championships, earned 13 appearances in the NAIA National Tournament and made four trips to the NCAA Division II South Central Region Tournament. He finished with a career record of 530-252 and was named the conference’s coach of the year 11 times.

Meyer’s iconic career culminated with enshrinement into multiples halls of fame, including those of the NAIA, San Antonio Sports, Heartland Conference and St. Mary’s University Athletics.

“I am deeply saddened by Buddy’s passing,” St. Mary’s University Executive Director of Athletics Robert Coleman said. “Buddy had a legendary Hall of Fame career at St. Mary’s as both a player and coach. He was respected and beloved by so many people — especially the players he coached. He took great pride in teaching the players how to do things the right way. He made an indelible mark on everyone he played with, coached with and worked alongside.”

As a student-athlete, Meyer scored 1,581 points, sixth-best in school history. Known for his accuracy at the free-throw line, Meyer also sent the Rattlers to the NAIA National Tournament for the first time when he sank two clutch free throws in the final seconds of a 1964 matchup against East Texas State University.

After graduating in 1965, he stayed in San Antonio to coach Antonian College Preparatory High School, which he led to the state championship in 1968. Meyer is also a member of the Antonian Athletics Hall of Fame.

He returned to St. Mary’s later that same year as a men’s basketball assistant coach to Ed Messbarger. In 1978, Meyer took over as head coach. Under his leadership as the athletics director from 1980-2001, St. Mary’s transitioned from the NAIA to become a National Collegiate Athletic Association (NCAA) Division II school.

His crowning achievement on the court came in 1989, when he led the Rattlers to the NAIA National Championship, defeating East Central University in Oklahoma, 61-58, in the title game. Meyer was named NAIA National Coach of the Year that season.

“As a coach and athletics director, Buddy stressed the concept of the student-athlete,” said St. Mary’s President Emeritus Charles L. Cotrell, Ph.D., who wrote Meyer’s nomination letter to the NAIA Committee for consideration into the organization’s Hall of Fame. “He emphasized to his players that completing their education was as important as their feats on the court, and that earning a degree and being engaged and caring citizens were attributes they would carry with them long after their playing days were over.”

In homage to Meyer upon his retirement, a group of alumni and friends established a scholarship to honor Meyer’s commitment to his student-athletes and to his alma mater. The Herman A. “Buddy” Meyer Jr. Endowed Scholarship Fund provides financial assistance to students and team managers whose athletic eligibility has expired.

The St. Mary’s mission of community service was instilled in Meyer during his days as a student — an ideal that he promoted throughout his career. While actively coaching at St. Mary’s, Meyer opened the campus during the summer to children to attend his basketball camps. Meyer was also heavily involved in fundraising initiatives that allowed for the Alumni Athletics & Convocation Center and Bill Greehey Arena to be completed in 2000.

The university bestowed upon Meyer the recognition of Distinguished Alumnus in 1983 and retired his No. 44 player jersey in 2003. Later, in 2007, the Bill Greehey Arena court was named the “Buddy and Anna Meyer Court” in recognition of Meyer and his wife, Anna.

“I met Buddy in the 1960’s and we grew to be great friends,” said Greehey, a 1960 graduate of St. Mary’s and longtime philanthropist. “We came from very similar backgrounds and we both appreciated the values of the Marianists. We shared a passion for St. Mary’s and the great work it does in helping instill strong values in its students, who are committed to giving back to the community when they graduate and enter the workforce. And, of course, Buddy had a special place in his heart for his basketball players! His coaching skills are legendary and he will always be remembered for building great teams, but more importantly, he will be remembered for building dedicated, hard-working athletes of strong character, who went on to make the world a better place.”

Donations can be made to the Herman A. “Buddy” Meyer Jr. Endowed Scholarship Fund.