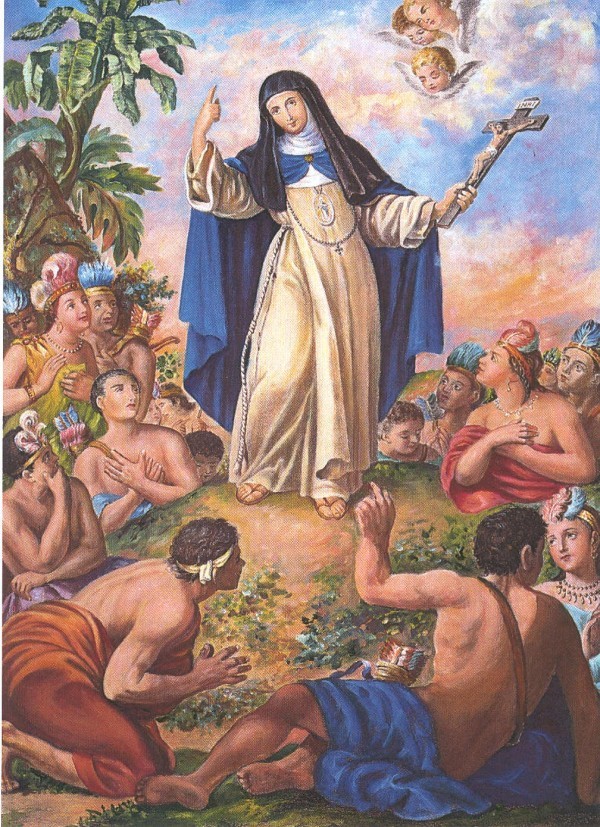 I would like to begin the New Year 2021 by sharing this intriguing and captivating story with you. During the 17th century when Spanish explorers and Franciscan missionaries first encountered the Jumano, Tigua, Hasani, and Caddo Indians and other tribes in Texas, New Mexico, and other parts of the American Southwest, they were totally surprised and astonished that these Indians knew so much about the Catholic faith, how to make the Sign of the Cross, and about their ardent desire to be baptized. Upon further probing, the Indians told the Spanish explorers and Franciscan missionaries that a beautiful, young woman, dressed in a blue cloak made several visits and had preached to them in their own language. She also attended to the sick and even healed them. Moreover, she exhorted them to enter the missions and urged them to contact Franciscan friars to construct new missions. The Jumano Indians referred to her as the Lady in Blue.

Across the Atlantic Ocean and during this same period of time, in the Convento de la Concepción, a Franciscan convent located in Agreda, Spain, in the province of Soria, lived an eighteen-year-old cloistered nun by the name of Sor María de Jesús de Agreda, whose habit was the Franciscan blue. She was a member of the Order of the Immaculate Conception and were known as Conceptionists. Sor María de Jesús de Agreda was born María Coronel y de Arana on April 2, 1602, to Francisco Coronel and Catalina de Arana in Agreda, Spain. Her father was a converso of Jewish descent who had converted to the Catholic faith. She had never set foot outside the convent and yet she was able to describe in great detail the Jumanos and the other Indian tribes in the American Southwest, as she was also able to describe the landscape, the environment, and the weather where these Indians lived.

I first heard the fascinating story of Sor María de Jesús de Agreda in the summer session of 1968, as an undergraduate student, when I took a history course, HS. 307 — Spanish Southwest, with Professor Dr. Félix D. Almaráz, Jr., at St. Mary’s University. On this particular Thursday morning, June 20, 1968, Dr. Almaráz, as usual, briskly walked into the classroom and immediately started covering both blackboards with copious historic names that he was going to cover in his polished lecture with such scholarly profundity and depth of subject matter. On the list of names on the blackboard, I noticed “María de Agreda.”

Sor María de Jesús de Agreda had the gift of a phenomenal personal experience known as bilocation, meaning that she was able to be in two places at the same time. She was in the convent praying and at the same time, she was preaching the gospel and the Christian faith to the Indians in New Spain. Ecclesiastical and civil authorities claim that between 1620 and 1631, she made as many as five hundred miraculous trips. The Jumano Indians repeatedly told Franciscan Friar Alonso de Benavides of this beautiful, young women, dressed in blue, who had appeared to them and taught them the Christian faith. The fascinating news about her bilocations went outside the convent to other parts in Spain and into New Spain.

In 1631, Franciscan Friar Alonso de Benavides visited Sor María de Jesús de Agreda to confirm the stories from the Indians and she told him of her extraordinary mystic bilocations. She showed him one entry in her journal that noted: “There was no language barrier between the Jumano Indians and I. They call their fearsome chief Capitan Tuerto, so named because he only had one eye.” Fray Benavides was speechless because this was a true fact. He continued to question her extensively. She was also interrogated by the Spanish Inquisition as well and her answers satisfied both of them. And, she later became spiritual advisor to King Philip IV of Spain after he visited with her on several occasions.

In modern times, scholars have written many books, biographies and historical essays for scholarly journals on the life of Sor María de Jesús de Agreda.  There are historical markers on Río Concho Avenue in the city of San Angelo depicting the wonderful and beautiful history and experiences of the Franciscan nun evangelizing the Jumano Indians. And, during the middle of November 2009, Dr. Almaráz visited the Convento de la Concepción in Agreda, Spain, where the nun lived all her life. He met with Spanish dignitaries and conducted lectures on the role Sor María de Jesús de Agreda played in the Christian evangelization of the Spanish Southwest during the 1600s.

When we got together for lunch after his visit to Agreda, Spain, Dr. Almaráz presented me with a beautiful memento shown below. It is a prayer card of Sor María de Jesús de Agreda. On the bottom left hand corner of the Front Side and on the bottom right hand corner of the Back Side,there is a small blue patch. Well, according to Dr. Almaráz, this little piece of blue material was taken from the blue cloak that belonged to the Lady in Blue.

Six years ago, this coming March 20, 2021, Dr. Almaráz held a press conference on the steps of City Hall to welcome a 35-member delegation from Agreda, Spain for an international conference the following day in the University Center at St. Mary’s University on the Venerable Sor María de Jesús de Agreda. On Saturday morning, March 21, 2015, at 9 o’clock, Dr. Almaráz opened the international conference entitled, “Sor María de Jesús de Agreda — The Lady in Blue and the Founding of the First Texas Missions.” Several local and state historical organizations and agencies sponsored the event, including the Ayuntamiento (City Council) from Agreda, Spain.

The latest news on Sor María de Jesús de Agreda (the Lady in Blue) is that the ecclesiastical authorities in Texas and New Mexico are working with the Vatican to initiate the beatification process that will ultimately lead to sainthood.

J. Gilberto Quezada is retired as an associate superintendent from the South San Antonio ISD. He has published an award-winning political biography, Border Boss: Manuel B. Bravo and Zapata County, by Texas A&M University Press. He currently serves on the Editorial Board of Catholic Southwest, A Journal of History and Culture.