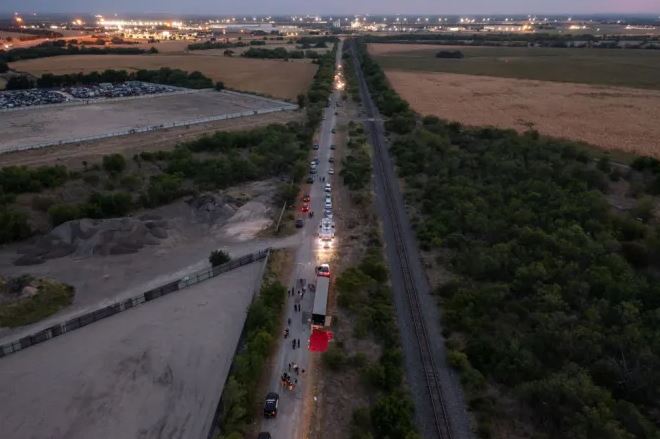 Following the discovery of dozens of migrants who died in an abandoned tractor-trailer in Texas — thought to be the largest en masse death of migrants from the southern border in modern history — the Archbishop of San Antonio is set to hold a memorial Mass on Thursday.

Archbishop Gustavo García-Siller, and Auxiliary Bishops Michael Boulette and Gary Janak will preside at a memorial Mass for the migrants June 30, the archdiocese told CNA, at 7 p.m. at the Cathedral of San Fernando. The liturgy will include a procession from the cathedral’s Main Plaza, a special cross, and candles and flags representing the countries of the deceased as well as the survivors, spokesman Jordan McMorrough said.

García-Siller said in a tweet that he had met with a young girl named Serenidad who was in the trailer and had survived. He urged prayers for the survivors and urged leaders to take action on immigration reform.

“Our people inside the truck are innocent. They were the result of corruption in their place of origin as well as in the Unites States. May we take [steps] to change and experience conversion for the better of the human person. Pray about it!” he wrote June 28.

The migrants were found dead in an abandoned tractor-trailer baking in extreme heat in San Antonio, Texas on the evening of June 27. The official death toll has risen to 53, NPR reported, and the dead include 22 Mexicans, 7 Guatemalans, and 2 Hondurans, with the others not yet having been identified.

San Antonio, about 150 miles from the national border at Laredo, is a regional hub for transportation, as well as for human trafficking and smuggling. San Antonio was also the site of a similar incident in 2017 in which 10 migrants died in a tractor trailer.

According to experts cited by NPR, it is likely that the people who were in the trailer had crossed the border on foot, before gathering in Laredo to be loaded into a truck. The truck driver is reportedly detained.

Marie Kenyon, who leads the Justice and Peace commission at the Archdiocese of St. Louis, told CNA that she was in Laredo last week with a volunteer group assisting at a Catholic Charities migrant shelter. She said as a mission diocese, Laredo’s migrant shelter does not receive as much attention or donations as some others along the U.S.-Mexico border, such as Brownsville and El Paso.

She shuddered at the thought that her volunteer group may have unwittingly passed the truck full of migrants going the opposite way on the highway from San Antonio to Laredo.

Bishop Mario Dorsonville, auxiliary bishop of Washington and chairman of the U.S. bishops’ committee on migration, lamented the deaths in a June 29 statement and called the incident a “harrowing depiction of the extreme risks assumed by migrants out of sheer desperation.”

“Unfortunately, this disregard for the sanctity of human life is all too common in the context of migration,” Dorsonville wrote.

“As a Church called to build a culture of life, we cannot tolerate this injustice. Instead, we must recognize that we are brothers and sisters, each imbued with God-given dignity. To prevent further loss of life, we urge governments and civil society to promote access to protection, including asylum, develop new pathways for those compelled to migrate, and combat human trafficking in all its forms.”

Pope Francis has also urged prayers for the migrants.

“I sorrowfully heard the news of the tragedy of the #migrants in Texas and #Melilla,” the pope said in a social media post on June 28.

“Let us #PrayTogether for these brothers and sisters who died following their hope of a better life; and for ourselves, may the Lord might open our hearts so these misfortunes never happen again.”