Home » Posada celebrated and how they originated 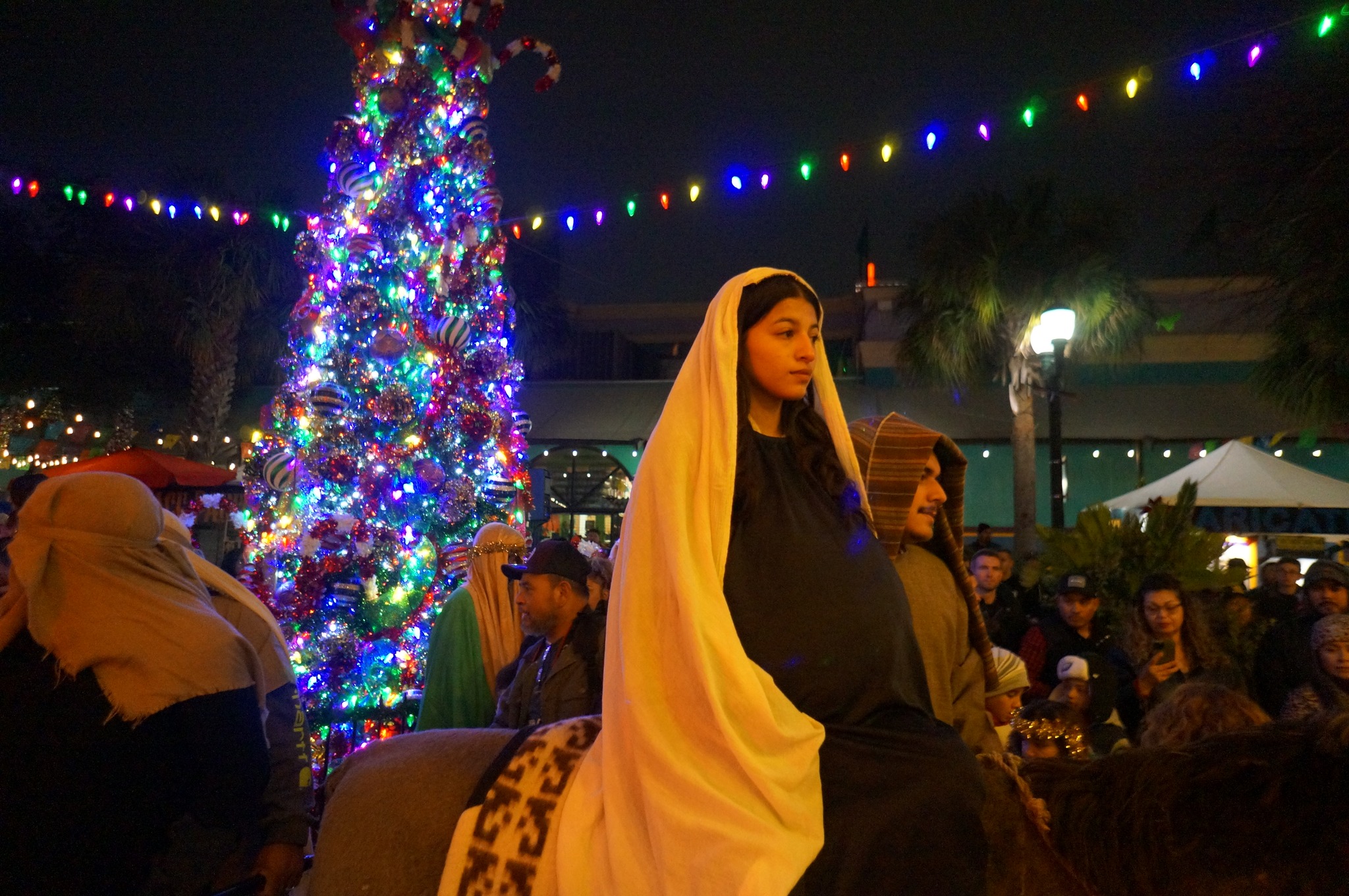 Posada celebrated and how they originated

La Gran Posada conducted by San Fernando Cathedral took place downtown on a chilly Sunday evening December 18, with Mary and Joseph preceded by a retinue to angels and shepherds comprised of religious education students from the cathedral.

The crowd made its way through Market Square to Mi Terra and La Margarita restaurants, and processed down Dolorosa Street to the Spanish Governor’s Palace, City Hall, and the Bexar County Courthouse, where the crowd was greeted by County Judge Peter Sakai, who informed them that there was no room at the inn. The 300 or so participants then crossed the street into Main Plaza and finally San Fernando Cathedral, where there was singing and later a reception with champurrado – Mexican hot chocolate — and sweet bread in the Plaza de la Cruz.

In the days before Christmas, the traditional “posadas” are usually celebrated at parishes throughout the archdiocese and also in Mexico, recalling the difficulties of St. Joseph and the Virgin Mary in finding a place for Jesus to be born.

But how did this custom come about?

Father José de Jesús Aguilar, deputy director of Radio and Television for the Primatial Archdiocese of Mexico, explained that the posadas, which means “inns” in Spanish, are the fruit of the inculturation of the Gospel in the New World.

In a video, the priest highlighted that “the Gospel reached these lands with the preaching of the first groups of missionaries: Franciscans, Dominicans, and Augustinians.”

“The Augustinians discovered that the indigenous people celebrated the birth of the sun with songs and lights around the winter solstice, i.e. from December 20 to 23. So, they decided to compare Christ to the sun and teach that Jesus Christ is the true sun of truth and justice,” the Mexican priest explained.

In this way, he said, the Catholic priests “took advantage of the nocturnal celebrations of pre-Hispanic origin and gave them a new meaning: accompanying Mary and Joseph on their pilgrimage to Bethlehem, looking for lodging.”

However, it would not be until 1587, when Pope Sixtus V granted special permission to Friar Diego de Soria to celebrate nine evening Masses leading up to the days before Christmas, that the tradition began.

“Thus, the posadas began with the celebration of nine Masses from December 16 to 24. Later other elements outside the church were added, such as the procession with the pilgrims, the singing of the Marian litany, and the request for an inn (posada) and the piñatas.”

Today, the procession, or “caminata,” involves a reenactment of Mary and Joseph’s search for an inn. People hold lit candles and sing hymns. The group either carries figurines of Mary and Joseph or has kids dressed up as them.

Neighbors coordinate so that the group will attempt to visit several homes but be turned away, as there was no room at the inn for the Holy Family.

Finally, a home welcomes the couple and everyone sings in unison as a door is opened: “Enter, holy pilgrims, receive this corner, for though this dwelling is poor, I offer it with all my heart. Oh, graced pilgrim, oh, most beautiful Mary. I offer you my soul so you may have lodging.”

“The first posada was held in the Augustinian convent of Acolman, a place very close to Teotihuacán,” said Father Aguilar, noting that “with the passage of time they began to celebrate in neighborhoods, streets, and patios, taking on a more totally popular character.”

Teotihuacán was a pre-Hispanic pagan religious center and the site of the Pyramids of the Sun and the Moon.

The piñata, one of the most characteristic elements of the posadas, “had its origins in China and was used on holidays,” the priest said.

Originally they were made “with wooden rods and paper, something very similar to lanterns,” but when the piñatas came to Italy they underwent a transformation.

“There, a clay pot was used as a base, which was shaped into a pine cone or other plants, with pieces of paper from China. That’s why it was called a piñata.

“When the piñata came to Mexico, it took the shape of the star of Bethlehem and continues to take many more shapes,” the priest explained.

Another interpretation of the seven points of the piñata is that they represent the seven deadly sins of pride, envy, greed, lust, gluttony, sloth, and wrath.

The stick the children use to beat the piñata represents virtue and being blindfolded represents faith. The candy falling to the ground is symbolic of God’s mercy.