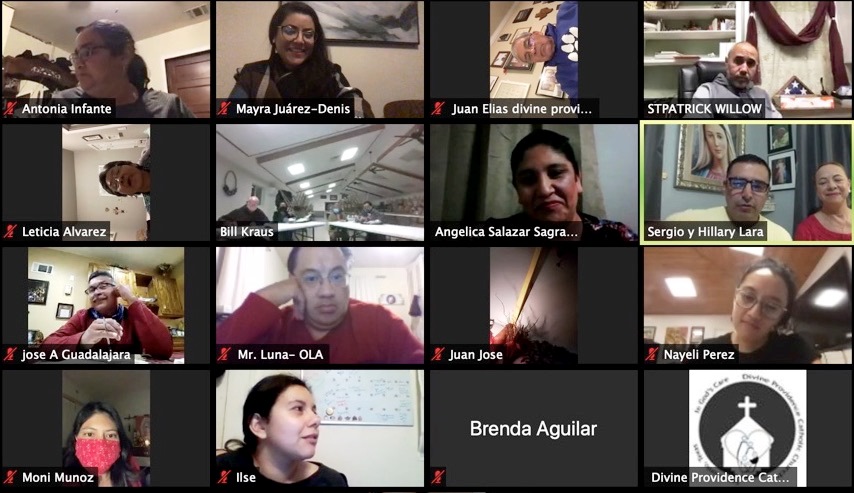 A successful partnering of West Side parishes with COPS/Metro Alliance to study Pope Francis’ recent encyclical, Fratelli Tutti (On Fraternity and Social Friendship) owes it all to Zoom — and the savvy leaders involved.

It began with an informal discussion on the encyclical between Father John Raharjo, CICM, pastor of St. Patrick Parish, Father Bill Kraus, OFM, Cap., pastor of Our Lady of the Angels and Mayra Juárez-Denis, an organizer for COPS/Metro. Their intent was to offer a study program on Fratelli Tutti to parishioners, but instead of clergy leading the gatherings, parishioners would be enabled to teach it themselves.

“One of the things we do at COPS/Metro,” notes Juárez-Denis, “is identify talent in the parishes so they develop their leadership, which will benefit not only themselves, but their families and parish life and the community.” Such a study program would expand the parish sense of community as well as lead them to reflect together on an underlying theme of Fratelli Tutti: Who is my neighbor?

Father Raharjo was one step ahead on this. When the COVID-19 pandemic first struck, he had struggled with how to keep the parish together in a time of social distancing and staying away from church services. Then, the Basic Christian Community or Comunidad Eclesial de Base program came to mind. Originating in the church in Latin America, this consisted of small groups who met to reflect upon scripture and apply its lessons to their situation. Influencing this movement was the Second Vatican Council’s call for the laity to take on a larger role at a time when the number of priests was dwindling.

Noticing more and more meetings were being done on Zoom, it struck Father Raharjo that such gatherings, done virtually, might be just the thing, so last May he initiated a 30-minute weekly rosary over Zoom on Monday evenings that grew to include another 30 minutes of Lectio Divina. Since not everyone was on Zoom, carrying this on Facebook Live was added, as many people were now using Facebook. Originally presented bilingually, by popular demand, Father Raharjo eventually found himself leading this regular event from 7 to 8 p.m. in English, followed by 8 to 9 p.m. in Spanish the same night.

“So, when Fratelli Tutti came up,” he relates, “I had the idea: ‘Why don’t we do this again — Zoom, reflecting, Fratelli Tutti?’” He initiated the new program in Spanish in November, intending it for just St. Patrick parishioners, but when other parishes heard of it, they asked to join and between 30 to 40 persons have been participating.

Each session of the study program is devoted to one of the encyclical’s eight chapters, with the host giving the greeting. Then the lay leader (who receives training and technical assistance from COPS/Metro) presents a 15-minute presentation they have prepared summarizing the chapter to the group. Breakout groups discuss the chapter among themselves, then return to the joint Zoom meeting for more conversation. “It is very beautiful,” says Father Raharjo, who notes the lay leaders are empowered by the process.

Father Kraus’ small group actually watches the presentations together, but socially distanced, on a television in the church hall at Our Lady of the Angels and does their breakout session work together there, while other small groups meet virtually from Sacred Heart and Divine Providence parishes.

Our Lady of Guadalupe in Helotes began the program in English in January under Father Ricardo Ramirez, parochial vicar there, who has welcomed participants from all parts of San Antonio — North Side, South Side, East Side and West Side, including members from seven archdiocesan parishes and persons of other faiths. “We have had great participation,” he reports. “We began it here at Guadalupe and the word spread. Friend shared it with friend, and now we have around 40 participants,” he adds.

“Fratelli Tutti is a great document, not just for the church but for the world,” says Father Kraus. “It talks about how we understand and approach the common good. If we are going to work for the common good locally, nationally, internationally, Pope Francis says we have to base it on the fact that we all are brothers and sisters.” The encyclical goes on to develop this in terms of social, economic and political programs working for the common good, he notes, something owed to everyone, especially the weakest and most vulnerable. Pope Francis, he says, has taken the social doctrine of the church and “puts it into the signs of the times.”

Sister Rose Kruppa, CDP, pastoral associate at St. Francis of Assisi Parish, is among the participants at Our Lady of Guadalupe, Helotes. “I love that we are persons from all the parts of the city of San Antonio,” she says,” all in one conversation and one dialogue about a common topic. Pope Francis uses the word ‘social friendship’ even in the title, and we are actually living what he is asking us to do.”

Anyone is welcome to virtually join the Fratelli Tutti study groups in progress. The Spanish sessions, through St. Patrick Parish, continue on first Tuesdays through June; the English-speaking sessions at Our Lady of Guadalupe, Helotes, run March 15 and then on fourth Mondays through August. All start at 7 p.m. Contact (210) 372-6972 for information.