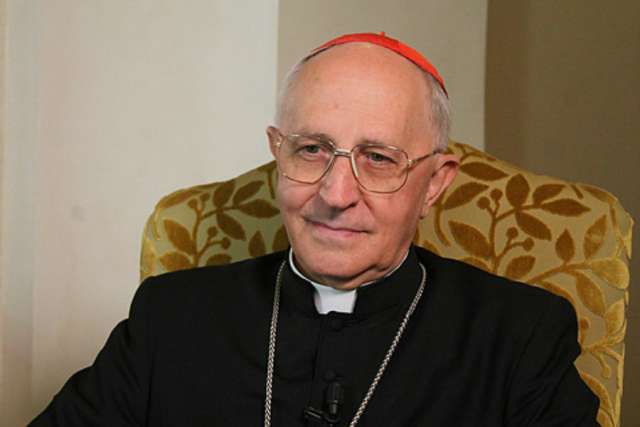 Cardinal Fernando Filoni, Prefect of the Congregation for the Evangelization of Peoples, speaks with CNA in Rome on August 22, 2014. Credit: Daniel Ibáñez/CNA.

In a press conference ahead of World Mission Day, Cardinal Fernando Filoni stressed the importance of missionary work, saying that it is a necessary aspect of the Christian faith, and that it must begin with each of us.

Head of the Congregation for the Evangelization of Peoples, Filoni emphasized that all Catholics are called to be a missionary in some way, not only religious men and women and priests, but also young people and all laity.

For example, the two patron saints of missions are St. Francis Xavier and St. Therese of the Child Jesus, who were both missionaries in completely different ways, he pointed out.

The former traveled to Japan to spread the faith, while the latter stayed within the confines of a monastery, yet they were both great missionaries, each in their own way, he said, according to a Catholic News Agency report.

To these, Filoni said he hopes to someday add a third patron saint, Venerable Pauline-Marie Jaricot, a French laywoman who in the 19th century founded the Society of the Propagation of the Faith.

“Jaricot is a laywoman who realized the role of lay people in missionary life,” he said. And she not only recognized the importance of active missionary work, but also of prayer.

One of her first initiatives was to create “a crown of prayer” for missionaries, because she knew that missionaries, who work at the “outposts” of society, could not survive without a network of prayer for support, he said.

Filoni spoke to journalists just two days ahead of World Mission Day, which falls on Oct. 22.

The Pope’s message for the 91st World Mission Day was published by the Vatican earlier this year. Pope Francis said that World Mission Day “is a good opportunity for enabling the missionary heart of Christian communities to join in prayer, testimony of life and communion of goods, in responding to the vast and pressing needs of evangelization.”

This is because “the world vitally needs the Gospel of Jesus Christ,” he said.

Christ, through the Church, “continues his mission as the Good Samaritan, caring for the bleeding wounds of humanity, and as Good Shepherd, constantly seeking out those who wander along winding paths that lead nowhere.”

You can tell that mission is “deeply imbedded” in the Pope’s heart, Fr. Tadeusz Nowak, OMI, said in the press conference Friday.

Representing the Pontifical Missionary Societies, Nowak said that Pope Francis “would want all Christians to have this deep sense of longing to share the faith and allow others to encounter personally Jesus Christ risen from the dead.”