Home » ‘It was a miracle I escaped’: Nigerian sister recounts deadly shooting 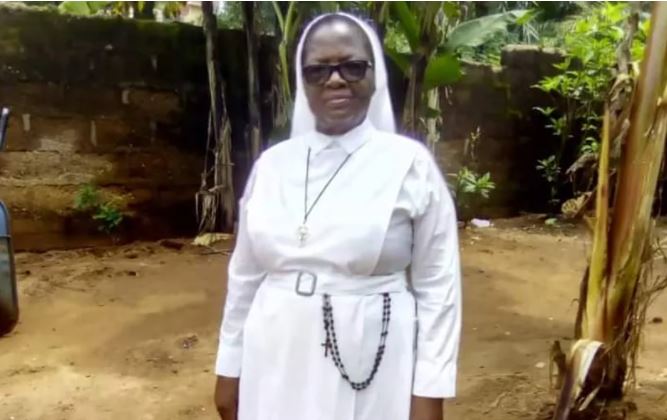 Sister Esther Nkiru Ezedinachi, a member of the Handmaids of the Child Jesus, assists victims of attacks in the Catholic Diocese of Ekwulobia, Nigeria. | Dennis Hurley Peace Institute

‘It was a miracle I escaped’: Nigerian sister recounts deadly shooting

A member of the Handmaids of the Child Jesus in Nigeria’s Catholic Diocese of Ekwulobia, Sister Nkiru was involved in heavy shooting when assailants attacked a vehicle she was traveling in with other people coming from a marriage ceremony.

A professor was killed and a number of other people kidnapped in the incident, which Sister Nkiru noted has not received any media attention.

In a March 16 interview with ACI Africa, Sister Nkiru described her experience as traumatic and said that she was lucky to have escaped alive.

“February 24 is the day I will never forget; a traumatic day,” said the religious sister, who provides psychosocial support to victims of militant attacks in the region.

She narrated to ACI Africa the events ahead of the shooting and said that her group had received prior warning that “some men” were on their way to attack them.

“It was at about 7:30 p.m.; we were coming back from a marriage event. Those ahead of us phoned and informed us that these men were operating at Ufuma-Ajali axis (of Ekwulobia-Ufuma road in Anambra State.) After waiting for some time, we decided to take the Oko route. Unknown to us, they overtook us with their robbed vehicles of which one of them was a Toyota Hilux,” Sister Nkiru recalled.

The sister said that before her group realized what was happening, the assailants had blocked the road and started shooting. “People were confusedly running to save their lives,” she said.

“We ran into the bush; some were kidnapped, including two persons in our vehicle who unknowingly ran towards them. A professor was shot dead instantly,” she said.

The sister said the shooting went on for about 30 minutes, after which she and the others who fled came out of their hiding places in the bushes, only to find their car damaged with numerous bullet shots.

She added that “with the help of a well-wisher,” a bank officer was contacted who closed their bank account before any additional money could be taken.

‘We must fight for justice’

Sister Nkiru has been working with others to deliver meals to hundreds of children hiding in bushes and on streets, unable to find accommodation in the IDP centers which are said to be full.

She said that with the rampant insecurity in Nigeria — including the Islamic terrorist group Boko Haram terrorizing the North and Fulani herdsmen and other militant groups harassing civilians in central and southern parts of Nigeria — little attention is paid to the sisters’ apostolate.

“There are many things happening in Nigeria these days that this type of apostolate is of no interest to usual media houses, except social media. Even the more than 30 minutes of heavy gunfire and killing of a professor on February 24 was not carried by any newspaper or broadcast by radio,” she noted.

Still, Sister Nkiru finds her work gratifying, and “the least she can do” to alleviate suffering in Anambra, she told the Denis Hurley Peace Institute (DHPI), an entity of the Southern African Catholic Bishops’ Conference (SACBC) that is monitoring the evolution of conflict in Nigerian states.

“I am very happy with the apostolate. I thank God for the opportunity given to me to feed these street men and women and we enjoy doing it and we see it as practical Christianity,” the sister said in a report that DHPI shared with ACI Africa.

“It was an inspiration from God. It all started in October 2020. I used my little monthly allowance to start it. It is exciting and today we feed from 20 to 30 people every Sunday with a variety of food items and drinks, especially water,” she explained in the report.

“I am at the heart of the people and I am also a human rights activist, because I don’t like injustice,” the sister continued. “We need to stand up and be direct … we must fight for justice.”

Sleeping ‘with one eye open’

In the March 16 interview, she told ACI Africa that insecurity in the Nigerian state was first brought about by the politicians who she said created fear “to scare people and make away with ballot boxes.”

What followed next, she said, was drug abuse and kidnapping.

At Catholic News Agency, our team is committed to reporting the truth with courage, integrity, and fidelity to our faith. We provide news about the Church and the world, as seen through the teachings of the Catholic Church. When you subscribe to the CNA UPDATE, we’ll send you a daily email with links to the news you need and, occasionally, breaking news.

As part of this free service you may receive occasional offers from us at EWTN News and EWTN. We won’t rent or sell your information, and you can unsubscribe at any time.

She said that the situation is made complex by angry youths who are agitating against marginalization of the Igbo (a Nigerian tribe), and various other kinds of injustices in the country.

Others are aggrieved by the detention of Nnamdi Kanu, the leader of the Indigenous People of Biafra (IPOB), a separatist organization in the West African nation, she said.

Sister Nkiru said that local people and Christians in the embattled Nigerian states are all living in fear. “With other economic hardships, and corruption, this can be said to be the worst time in the history of this country and our area,” she said.

“As religious, there is not much we are doing except counseling. Political leaders are not … even talking about daily killings taking place in different parts of Nigeria; instead, their major concern is the 2023 election,” she said.

“As it is now,” she added, “everyone sleeps with one eye open. And many are afraid of what may happen tomorrow.”

This story was published originally by ACI Africa, CNA’s sister news agency. It was edited by CNA.