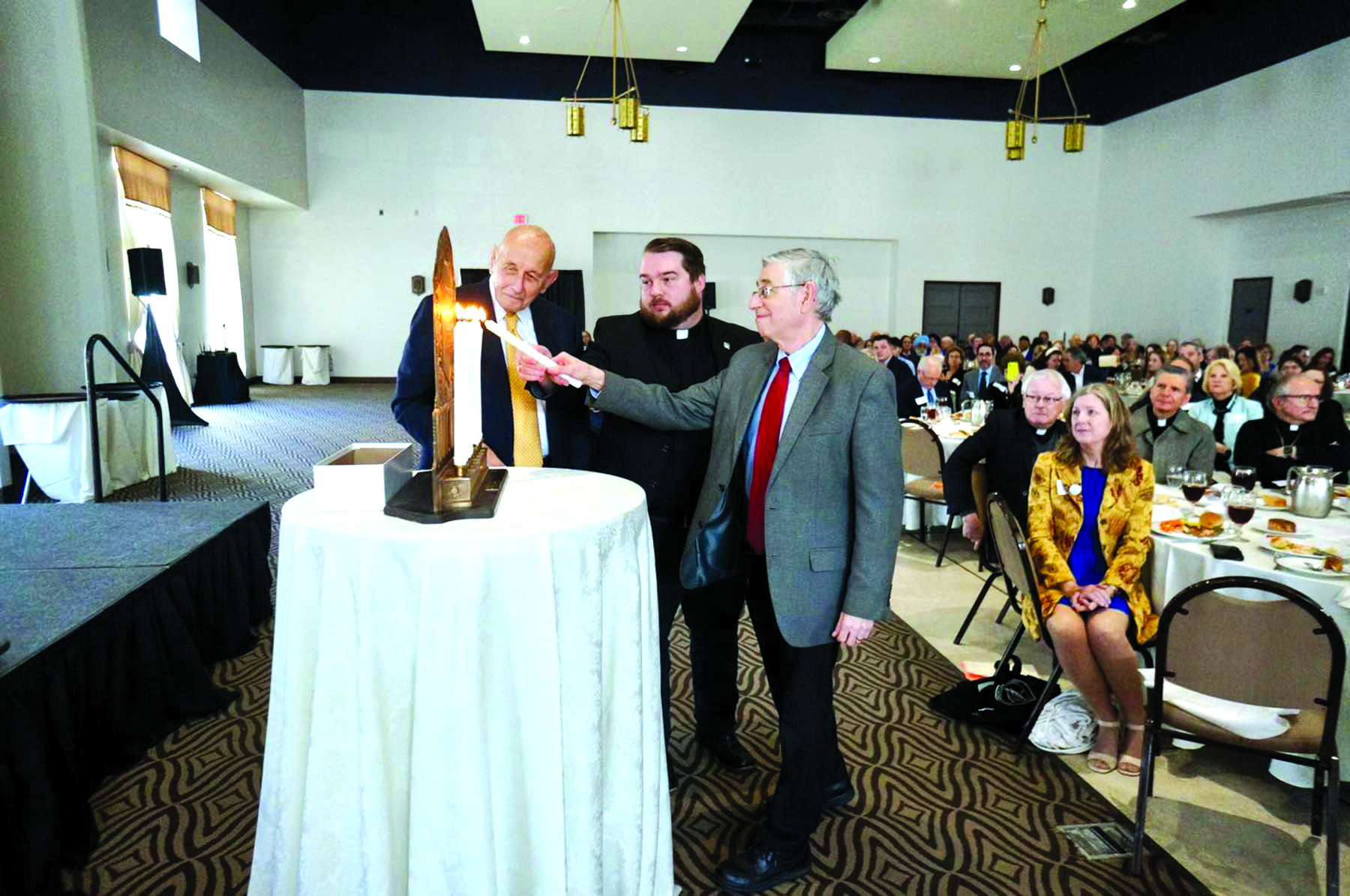 Catholics and Jews again celebrate Hanukkah, the festival of lights

Catholics and Jews recently gathered together for their 21st annual special joint Hanukkah celebration that has become a unique San Antonio tradition.

About 350 members of both faiths filled the tables at the San Fernando Cathedral Hall on December 15, welcomed by San Fernando’s rector, Father Carlos Velazquez, and Lauren Stanley, Board chair of the Jewish Federation of San Antonio.

This was followed by Archbishop Gustavo García-Siller’s opening prayer and a choral presentation of Hanukkah songs by the Providence High School Choir, led by Elaine Bir.

Acknowledgements were made by Judge Barbie Scharf-Zeldes, who was co-chair of the event, along with Henry Gonzalez III.

The guest speaker for the gathering was introduced by Rabbi Emeritus Samuel Stahl of Temple Beth-El.

Featured speaker was Father Ron Rolheiser, OMI. Father Rolheiser is a priest, theologian, professor, and award-winning author. He is the former president of the Oblate School of Theology. He holds a bachelor’s degree from the University of Ottawa and Newman Theological College Edmonton and masters’ degrees from the University of San Francisco and University of Louvain, Belgium along with a Doctor of Philosophy and Doctor of Sacred Theology from the University of Louvain. He is a popular speaker in contemporary spirituality and religion and the secular world. He writes a weekly column that is carried in over 70 newspapers around the world, including Today’s Catholic, official publication of the Archdiocese of San Antonio, a fact highlighted by Rabbi Stahl.

Following Father Rolheiser’s presentation, which focused on light, an explanation and blessing over the Hanukkah lights was given by Rabbi Mara Nathan of Temple Beth-El, and as the candle lighters came forward singing was done in English by Father Velazquez and in Hebrew by Orit Eylon, professor of Music and voice area coordinator at the University of the Incarnate Word.

A Menorah is a seven-lamp candelabra made from pure gold and was used by Moses in the desert. According to the Book of Exodus, God asked Moses to create the candelabra and put into the temple in Jerusalem to mark it as a sacred space. The Menorah is still depicted in modern Jewish temples, and a nine-lamp version is lit during the celebration of the Jewish holiday of Hanukkah.

The Menorah is often used in Christian artwork, particularly paintings depicting scenes from the life of Jesus, such as his preaching in the temple Jerusalem.

The closing prayer was given by Rabbi Avraham Scheinberg of Congregation Rodfei Sholom.

Mentioned in remarks by several speakers at the luncheon was concern regarding the rise of anti-Semitism.

Pope Francis, in a meeting with Catholic, Protestant, and Jewish representatives last September in Budapest, Hungary, denounced “the threat of anti-Semitism still lurking…”

The pontiff encouraged unity, stating that “the God of the covenant asks us not to yield to separatism or partisan interests. He does not want us to ally ourselves with some at the expense of others.”

“Let it never be said that divisive words come from the mouths of religious leaders, but only words of openness and peace. In our world, torn by so many conflicts, this is the best possible witness on the part of those who have been graced to know the God of the covenant and of peace,” the Holy Father added.