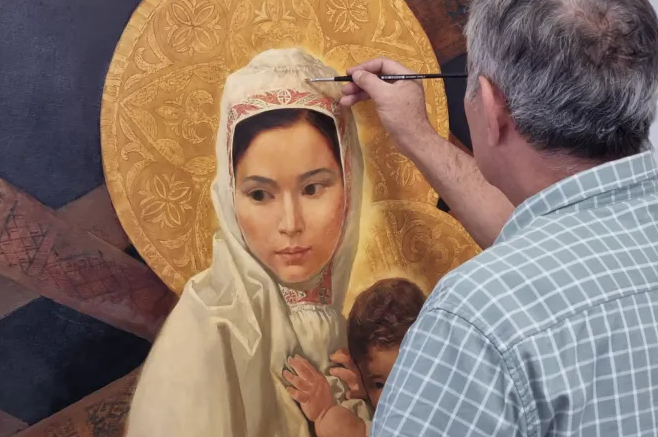 A Kazakh artist is creating possibly the first-ever painting of Mary and the Child Jesus as native Kazakhs; it will be displayed in Kazakhstan’s only Marian shrine.

It is hoped that the icon, in the form of a triptych, will be blessed by Pope Francis during his Sept. 13-15 visit to the Central Asian country, where more than 70% of the population is Muslim.

The artist, Dosbol Kasymov, told EWTN News in Almaty, Kazakhstan, on Aug. 5 that his inspiration for the image came from his culture’s love and reverence for mothers.

Mother is “a common image,” uniting mankind, Kasymov said. “We are all born, we all came into this world thanks to our mothers.”

Titled “The Mother of the Great Steppe,” the large icon was commissioned by Archbishop Tomasz Peta, the head of Kazakhstan’s Catholic diocese, Maria Santissima in Astana.

The Kazakh Steppe is a treeless, semi-desert grassland covering the northern part of the country, south of the Ural Mountains.

Peta told EWTN News last month that the image of the Kazakh Mary and Jesus is intended for Kazakhstan’s only Marian shrine, Mary Queen of Peace, in the town of Ozernoe, about 250 miles northwest of Nur-Sultan.

The painting depicts the Virgin Mary as a Kazakh woman dressed in traditional clothing. In her arms, she holds her baby son, the Child Jesus, held in the robe of an adult man, a sign of his future death and the Roman tunic he will wear on his way to the cross.

EWTN News spoke to the artist ahead of Pope Francis’ visit to Kazakhstan, while the painting was still a work in progress. Kasymov spoke about some of the traditional Kazakh symbols he incorporated into the icon.

Kasymov said the Child Jesus’ halo is in the form of a shanyrak, the emblem of Kazakhstan and a common cultural symbol based on the shape of a cross.

Ethnic Kazakhs are predominantly Sunni Muslims, the most commonly practiced religion in the country. According to a 2009 national census, the second most practiced religion is Russian Orthodox Christianity, at more than 20%. The country, which has approximately 250,000 Latin-rite Catholics, according to 2008 statistics, is also home to many immigrants.

The nationally-acclaimed painter said he hopes his work will be received by the people of Kazakhstan “with love, with warmth, because, above all, it is the image of the mother.”

“Here is my personal opinion: I think that Kazakhs are very tolerant, they easily accept any culture,” he said.

The finished icon is expected to include a panel on each side depicting an ethnically Kazakh angel playing traditional musical instruments.

After the image is blessed in Nur-Sultan by Pope Francis, who will visit the city for the VII Congress of Leaders of World and Traditional Religions, it will be placed in a new prayer chapel at the Mary Queen of Peace Shrine in Ozernoe.

Peta said the new chapel would be built in the shape of a yurt, the traditional round tent used by nomadic groups in Central Asia. The shrine is also getting a new pilgrim welcome center dedicated to St. John Paul II.

The new chapel “is for all people, regardless of faith and nationality; this yurt will be a meeting place with Mary, and through Mary, with Jesus,” Peta said.

Kasymov said he faced a difficult decision when Peta asked him to create an icon of Mary and the Child Jesus, given that he himself is not Christian, nor even particularly religious.

“When the offer came in to write this work, of course I had my doubts,” he said. “But then I talked to my relatives, brothers, friends and they said, ‘Of course you should write it, it’s our common culture.’”

Kasymov said he is also interested to see how his depiction of Our Lady of the Steppe interacts with the many European images of the Blessed Virgin Mary.

He explained that Mary is shown looking away because “Kazakhs consider it not quite right or polite for a woman to look directly into the face of her interlocutor.”

“We say in Kazakh, ‘Tygylyp Karama,’ do not stare straight ahead,” he said. “A woman should not look at the spectator directly, she looks a little into the distance. It’s a trait of modesty and part of etiquette.”

The Virgin Mary’s gaze can also be interpreted to mean that she is thinking about the future, that “she senses what is going to happen to her son,” he said.

The Christ Child, who is looking the other way from his mother, “has a mixture of feelings,” the artist noted. “It is as if on the one hand, he does not want to separate from his mother, but on the other hand … somewhere in his depths, in his young subconsciousness, there is also an understanding that he has a path, as each of us has our own path.”

Alexey Gotovsky contributed to this report.

This story was updated at 10:52am with the correct location of the town of Ozernoe.