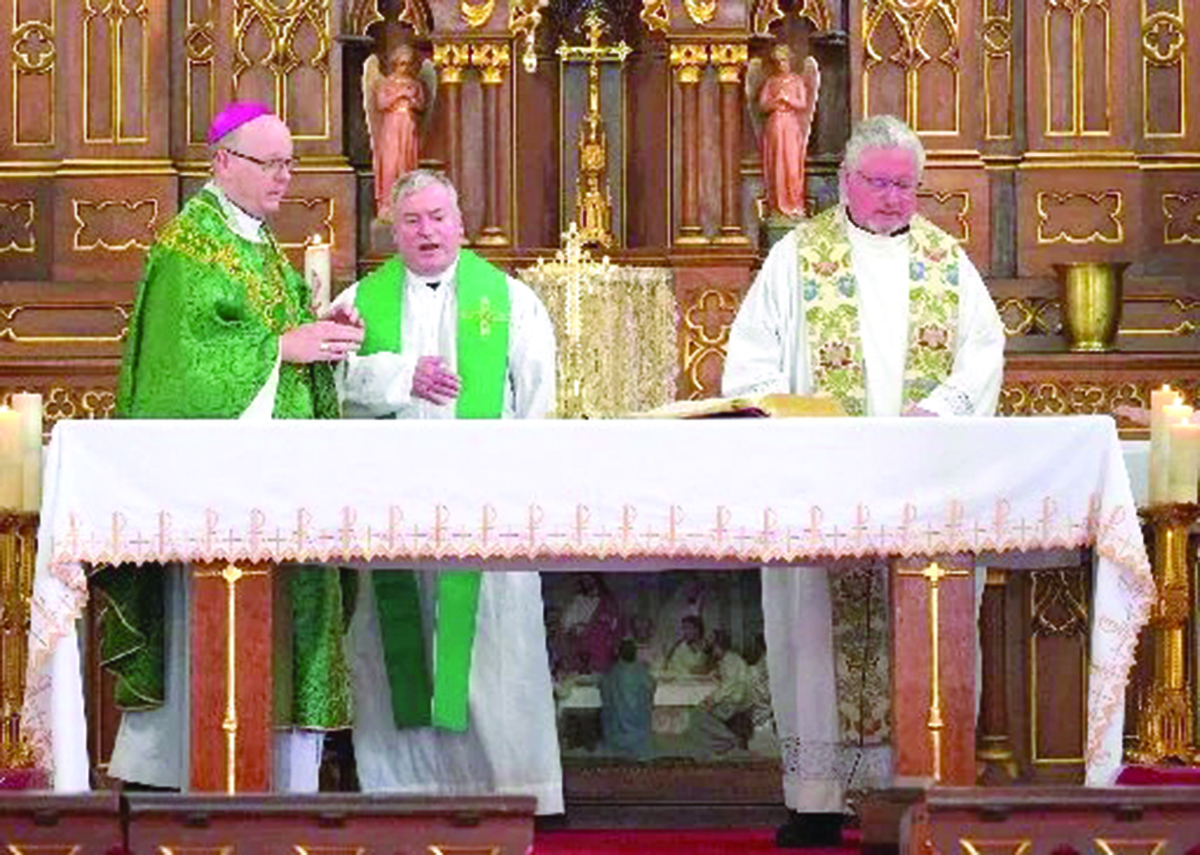 HIGH HILL — Just about every kind of person can be found in an airport — from vacationers heading for a little piece of heaven to business people whose schedules seem like hell on earth.

The concourses are a limbo of sorts as people wait to get to their destinations.

If any travelers are carrying around too much emotional baggage, they might find an airport chaplain to lighten the load.

Father Charlie Samperi recalled a man who saw his priest’s collar and approached him because he was weighted down with the need for reconciliation.

The priest, pastor of St. James the Apostle Parish in Spring, said they found a quiet spot off the concourse where he heard this man’s confession. “He just unloaded, and it was a wonderful confession,” he said, adding that it had been a long time since the man had received the sacrament of reconciliation.

Father Samperi serves in the Archdiocese of Galveston-Houston, which hosted a retreat for Catholic airport chaplains in mid-February. The retreat was held virtually the past two years because of the coronavirus pandemic, and the chaplains said they were happy for their own getaway and face-to-face time with colleagues from around the country.

Father Michael Zaniolo ministers at Midway and O’Hare airports in Chicago and is the president of the National Conference of Catholic Airport Chaplains. He recalled being drawn to the ministry as a young priest while leading a group of boys in an exploration of the priesthood. To demonstrate the different types of ministry, he took them on a field trip to an airport. The priest serving as chaplain seemed to have had an effect on everyone, he said.

“I thought, ‘This is a great place to be a priest,’” he told The Catholic Lighthouse, newspaper of the Diocese of Victoria.

In the spirit of “synodality,” or becoming a listening church, it fits right in. “We literally are walking with these people,” Father Zaniolo said.

During his airport rounds, people who are fearful of flying will approach. “You give them a blessing and it’s like a burden has been lifted off their shoulders,” he said. “Within just a few moments, you can have an impact on someone.”

Deacon Alfred Mitchell who ministers at Hartsfield-Jackson Atlanta International Airport, one of the world’s busiest, said he never knows how a day at the airport will go. The retreat, he said, offered participants quiet time to reflect as well as time to undergo training.

The chaplains took a field trip to tour the painted churches in the Diocese of Victoria Feb. 19. Bishop Brendan J. Cahill celebrated Mass for the chaplains at St. Mary Church in High Hill. He said he sees the chaplains as ministers who truly love others “without any exception.”

“You are striving to get us to go beyond making any exceptions, finding people where they are … people who work at the ticket counter, business people traveling eight months a year who want someone to talk to, where people may often feel forgotten,” Bishop Cahill said.

“We are constantly trying to see who’s in the shadows, who may feel forgotten, and who I can be present to and listen to, to bring them the heart of Jesus, and, as we come to realize, to experience the heart of Jesus through them,” he added.

The chaplains said some airports offer Masses during the week and distribute ashes on Ash Wednesday for travelers who cannot make it to church. Chapels are often shared with other faiths that provide chaplains as well. Between formal services, they simply visit with anyone who wants a clergyman to talk to.

Deacon David Reiser, chaplain at Charlotte Douglas International Airport, in North Carolina, said their motto is, “We loiter with purpose.”

Sister Joanna Okereke, assistant director for Pastoral Care of Migrants, Refugees and Travelers at the Secretariat of Cultural Diversity at the U.S. Conference of Catholic Bishops, described the retreat as enriching and refreshing.

“We share experience, dialogue on the way forward especially on how to improve our ministry of pastoral care,” said Sister Okereke, a member of the Congregation of Handmaids of the Holy Child Jesus.

Sister Okereke works with the bishops’ Subcommittee on Pastoral Care of Migrants, Refugees and Travelers, which has the responsibility for outreach and welcome to people of other nations and “people on the move.”

Besides people who travel by air, her office is concerned with seafarers, circus and carnival workers, Roma and Irish Travelers, migrant farmworkers, race car drivers, people in tourism and truck drivers.

Bishop Brendan J. Cahill of Victoria, left, Father Michael Zaniolo of the Archdiocese of Chicago, and Father Charlie Samperi of the Archdiocese of Galvestion-Houston, prepare for Mass at St. Mary’s in High Hill for members for members of the National Conference of Catholic Airport Chaplains. The Archdiocese of Galveston-Houston hosted a retreat for the chaplains in mid-February and they took a field trip to see the painted churches of the Victoria Diocese. Father Zaniolo and Father Samperi are airport chaplains in their respective cities.